Five Questions The Big O Should Have Asked Sarah Palin 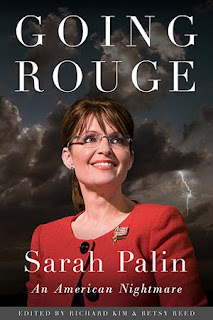 Since no real journalists are likely to get a sit-down with Sarah Palin during her book promotions blitz, it sure would've been nice for Oprah to have made a stab at a serious questioning of the former Governor of Alaska.

Remember in '06, when Oprah took apart that fabricating novelist James Frey and his enabling editor, Nan Talese? At that time, I gave The Big O big props for wielding a fine stiletto of truth in the name of defending the precious line between Fact and Fiction in print. Now, though, I wonder if maybe Oprah had rolled so hard on Frey at that time because his deception had put her reputation at risk, and the degree of personal humiliation she felt at having been duped by the dodgy writer created a volcano of Oprahnic anger, one that would only be sated by a Public Sacrifice.

Sure, she apparently apologized to Frey several weeks ago, in a weirdly-timed, but ultimately understandable gesture. (Oprah is big on forgiveness, so her apology to Frey for having flayed him in front of a billion viewers tracks as consistent.) Yet I anticipated a stronger roll on Palin from Oprah, not just because of what she'd laid down on Frey but also because Oprah kinda-sorta used to be a broadcast Journalist, and she has over the years expressed clear-eyed simpatico with the increasingly besieged practitioners of the Fourth Estate.

Instead, in her interview yesterday with Palin, we witnessed a spectacle of polite nudging and Girlfriend-ey winks and nods. How tellingly Show Biz was it, for example, when at the end of the 40+ minute talk, Oprah asked Palin if a national television talk show is in Palin's future. "Should I be worried?," Oprah asked playfully. To which Palin replied, with characteristic faux modesty, 'Oprah, you are the Queen."


Their interview has been parsed, dissected, and chewed over ad infinitum ad naseum elsewhere -- including on my Facebook page, where I live blogged it -- so I won't rehash it here now.

Instead, I present five questions that The Big O should have asked Sarah Palin....if only The Big O had decided to put her Journalists’ Hat, rather than her Show Biz Lid, squarely atop her well-coiffed head during her talk with the ex-Gov.

1) While campaigning with John McCain last fall, you repeatedly accused then-Democratic Presidential candidate Barack Obama of "palling around with terrorists." Many more of your stump speeches contained references to Obama as promoting a "socialist" agenda. Do you still believe these things about President Obama? (Thanks to Donald Collins, who suggested this question.)

2) In your book, you describe the moment when you learned that the child you were carrying, your son Trig, would likely be born with Down Syndrome, and that for a fleeting moment, you 'understood' how some women might consider abortion. So isn't it hypocritical of you to support anti-choice legislation?

3) Did you order or arrange the firing of your brother-in-law from his job supervising a unit of the Alaska State Troopers?

4) Did Nicolle Wallace advise you that Katie Couric had "low self-esteem?"

5) You studied journalism in college, and worked for a local news program for a time. How do you describe the role of journalism and journalists in a free, democratic society?

Now, that would have made for some Must-See TV.

A final point on the current Palin-palooza that is sweeping across the fruited plain: You may have heard that quite a few folks have mounted "rejoinder" publications to coincide with the appearance of the former Governor's "autobiography" this week. (Yeah, I put quotation marks around "autobiography" since it is not likely that Palin actually WROTE her own book.)

One of the rejoinders dropping today is called (quite cleverly) Going Rouge: Sarah Palin, An American Nightmare. It is put out by a new publishing concern, OR Books, and edited by my colleagues at The Nation, the estimable Betsy Reed, Executive Editor of The Nation, and the dashingly brilliant Senior Editor, Richard Kim. I am a Contributor, one of several writers who published essays and articles in the Nation and elsewhere last year during the frenzied weeks after Palin popped up on the GOP presidential ticket.

My essay, titled, "Sarah's Steel Ones," makes the point that Sarah Palin is worthy of respect for a couple of reasons: A) she is a human being and B) she appears to possess a high degree of ambition, moxie and self-confidence, traits that, in and of themselves, are valuable inclusions in a woman’s personal arsenal.

A year later, even in light of the...unfortunate nature of many of her recent choices, I do not rescind my original argument. I will however take this opportunity to amend it: Self-confidence, moxie, and ambition are great, but they are most effective and self-sustaining when combined with equal measures of self-awareness, intellectual curiosity, honesty, and compassion.

I believe that women who successfully achieve this balance are often called "difficult" by men....while other women will choose the word “together.”
Posted by Amy Alexander at 7:41 AM 5 comments: