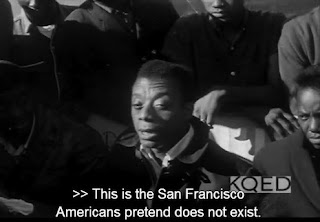 A Facebook friend, Darryl Cox, put the link on my Wall after I'd posted a story on gang violence in SF that I'd read in The San Francisco Chronicle. Cox, who had worked in city government in San Francisco decades ago, is an excellent source of contemporary black history on "the Paris of the West."

Cox told me that "Take This Hammer" had only aired once in San Francisco, in 1963, and that it had upset the powers that be in my hometown.

I watched it for the first time last week, on August 3 -- coincidentally, one day after what would have been Baldwin's 88th birthday.

It was produced by KQED on behalf of National Education Television, predecessor of WNET in New York.

In it, Baldwin is an expert interrogator of his subjects, black residents of San Francisco. He is physically small but armed with an alarmingly direct gaze, a fearsome intellect, and a sharp way of drawing out his subjects. The producer or director also made the wise decision to cut in excerpts of Baldwin talking directly to the camera, seated in what appears to be a tidy apartment, smoking, wearing a natty white shirt and neck-kerchief, and succinctly, somewhat dispassionately deconstructing his findings.

Among several pungent comments and observations by Baldwin, during the 44 minute long documentary:

-- You cannot pretend you're not despised if you are."

I am greatly moved by this documentary. For starters, Baldwin is a literary and journalistic hero of mine. Second, as anyone who has read my opinion-writing during the past decade probably knows, I was born in San Francisco in 1963.

Growing up there, I felt a thrill of endless possibilities -- much as the techie-hipsters and financiers who currently throng its streets likely experience -- a pervasive sense of optimism aided in no small part by the city's spectacular vistas, cozy layout, sophisticated understatement. (Though a journalist friend, Tim Golden, once told me that he found the city and some of its denizens a mite 'precious' for his liking.)

My family was middle-class, we lived for a time in subsidized housing on Potrero Hill, then Bernal Heights, then in a tidy house on the West or 'ocean' side of the city, which my Mom bought. I attended well-funded public schools in the Sunset District and went to church camp in Sonoma County every summer. Only when I reached my mid-20s and entered the workforce in earnest did it occur to me that my race or gender might be features that could slow my professional development and possibly dampen my chances for a successful career. As a 1963 resident tells Baldwin in "Take this Hammer," no blacks had to fear a Bull Connor or a Klansman chasing them down the city's hilly inclines. But one might just be 'killed with a pencil," instead, in the city's corporate or retail workforce. My adult family-members all worked in government agencies, which offered job security and enforced meritocracy. There were few immediate role models for me as I made my entree to private industry -- the news business -- during and after college.

I outline that dynamic in greater detail in my current book, and acknowledge that the media business in the Bay Area -- such as it was in the 1980s when I came of age -- was and is a unique animal within the overall workforce in San Francisco. And now, of course, the media industry has been all but subsumed by the tech industry, and the population of black residents has been diminishing steadily since the early 1980s. Are native blacks who remain being employed at these shiny new enterprises? What do you think?

The sentiments expressed by the city's black residents who were interviewed by Baldwin in '63 -- particularly the young adult males who are frustrated over being shut out of the workforce -- are devastating....and familiar. I have watched this documentary three times since Darryl Cox shared it with me.

I am still processing "Take this Hammer" and will probably write about it again.

For now, I hope you find the time to watch it in full: I love my hometown but I hope you can forgive me if I am also a bit cynical about its legendary reputation as a citadel of social and economic egalitarianism.

"Take This Hammer" lives, by the way, at the San Francisco Bay Area Television Archive, which is housed at my alma mater, San Francisco State University. I believe it deserves a home, too, at the Paley Center in New York. Then again, as a black SF native and a Baldwin adherent, I am not exactly impartial about its historic significance.

Oh, and a viewing tip: Disable the captioning feature before watching.
Posted by Amy Alexander at 10:33 AM 1 comment: