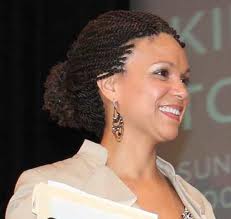 Lately I have experienced feelings of amusement, optimism, and aggravation when observing the parallel worlds that exist in the universe of cable and network television political talk shows.

I am writing this on Sunday morning, June 10.

On CBS’s “Face the Nation,” and ABC News’s “This Week, with George Stephanopolous;” on CNN’s “State of the Union,” there are panels of guests that I think of as the Usual Suspects. (NBC’s workhorse Sunday political talk program, “Meet the Press” was pre-empted on June 10 but it’s long track-record of offering up homogeneous guest lists is well-documented. )  Of those ‘establishment’ political talk programs, only “This Week,” at ABC featured one guest who can safely be described as ‘non-traditional’  -- Van Jones (though denizens of certain media and political circles in DC understand that Jones is quite established, if not exactly a member of the Establishment.)  David Axelrod, Senior Strategist for President Obama’s re-election campaign, even managed to appear on two programs in this same morning, CNN’s ‘State of the Union’ and ABC’s “This Week.”

Meanwhile, on the cable television network MSNBC, the line up of guests on two relatively new weekend political talk programs – “Up, with Chris Hayes,” and "The Melissa Harris Perry Show" -- on June 10 were refreshingly non-traditional.  More than just this past weekend’s guest line-ups, though, there is another important feature of "Up," and "The MHPS:"  Both programs' consistent delivery of high level conversations about current affairs that are meaty, expansive and (sometimes) counter-intuitive.

The discussions taking place at “Up” and “The Melissa Harris Perry Show’ effectively highlight the increasing irrelevance of the counterpart political talk programs on NBC, ABC, CBS and CNN.  Leaving aside the political partisanship aspect – for surely no one will argue that Hayes and Perry are not presiding over liberal-oriented discussions – the nagging absence of meaningful explorations of important topics on the ‘traditional’ political talk programs is now starkly evident.  Further, while Hayes and Perry may indeed hold liberal ideas and values, their discussions are scrupulously fair-minded and their guest-lists occasionally bipartisan.

In full disclosure, I have to say here that Hayes is a former colleague at the Nation, and he served as my informal envoy to covering national electoral politics in DC back in 2008 when I was a Fellow at The Nation Institute. Perry, while not a personal acquaintance, also writes for my alma mater, The Nation, and maintains a professional network that overlaps my own. However I am also a media critic, and it is under the media critic’s hat that I am sharing my opinions on these two programs at this time.

Until now, I refrained from commenting on these new political talk shows -- and about the disparate, parallel worlds that are now starkly visible -- for two reasons: A)  I am inherently ambivalent about national political talk programs that are partisan, and B), I wanted to observe both programs for several editions, since I am aware of the challenges of mounting a start up, and of the steep learning curve to finding one’s editorial and operational footing in the merciless fishbowl of a national broadcast medium.

But after watching both programs for many weeks now, I am happy to report that both are bringing much-needed fresh air and warming sunlight to a genre that had been stuck in the 20th Century.  I cannot say that “Up’ or “The Melissa Harris Perry Show” will be the saviors of the national political television talk show but they have updated -- and I daresay vastly improved --  the field.

“Up” in particular, is fascinating. Hayes, for all his newness in big time television (or maybe because of his newness)  has successfully grasped a cultural development that producers and hosts at the other leading political talk programs overlook:  Viewers are residing in the US at a time of epic demographic and economic change, and they are hungrier than ever for individuals and discussions in media that reflect their concerns and their experiences.

More pointedly, growing numbers of viewers understand intrinsically that national ‘experts’ on the pressing domestic and international topics of the day – the economy, education, war, and poverty – are not exclusively the Usual Suspects, i.e., middle aged white male politicians, policy wonks, educators or corporate leaders. On “Up,” and at “The Melissa Harris Perry Show,’  the hosts and producers (aka ‘bookers’) have successfully displayed, weekend after weekend since these shows debuted, line-ups of guest ‘experts’ that are probably revelatory for millions of Americans -- viewers who had become accustomed to only hearing from the David Frums and Anne Colters and David Gergens of the New York-DC pundit ranks.

Yes, this distinction to some degree is superficial, and I am aware that saying such a thing might give rise to accusations that I am advocating for a brand of on-air affirmative action quotas in political talk show guest lists. So fire away on that, if you wish.  What I am describing is an important shift within a leading (if imperfect) mass media space.  Cable and network television news organizations are struggling to hang on to and/or grow audiences; a cynic might also argue that bringing ethnic and class inclusion to the content and guest-lists of two national political talk programs is a gimmick designed to appeal to the growing populations of black and brown residents of the USA.

But come now.  Economic considerations drive any network’s programming decisions. And in a fundamentally pragmatic sense, whatever the political motivations for baking race and class inclusion into the content and guest-lists of “Up” and “The Melissa Harris Perry Show,”  the truth of the matter is that it makes smart business strategy to build programs that have a shot at appealing to the looming New Majority in America – Latinos, Asians, and tech-savvy young people of all ethnic stripes.

There is also this: News and information on national broadcast systems has, for at least three decades now, been inching inexorably into the entertainment section of mass media, as Marty Kaplan of the University of California’s Norman Lear Center succinctly laid out during a recent edition of  PBS' “Moyers & Company.”  As a veteran journalist, I am well aware of this creep, and find it worrying indeed, particularly during this era when global social and economic developments whipsaw around and land in our front yards faster than the speed of light, rendering the need for accurate, well-reported news and yes,  opinion, more important than ever.

But we've got to work with what we have;  most of us have little choice but to live where we are.  The ascension of social media has amplified this shift of news into the 'entertainment box,' as Kaplan put it, and it is wise to develop strong media literacy chops and a grounded set of values when considering the current landscape of what passes currently as 'news,' whether in opinion or 'just the facts' formats.

Thus, here is what I personally find ‘entertaining’ about “Up” and “The Melissa Harris Perry Show’ (in contrast to the conventional fare at other cable and network political programs):  The spectacle of panel after panel of ‘experts’ who know their stuff….and who also happen to look, talk, and ‘present’ like people that I move among every day. More pointedly, guest panels that represent the best and brightest of what America can offer, from across the spectrum of key disciplines.
How radical is that?
Posted by Amy Alexander at 1:18 PM 1 comment: