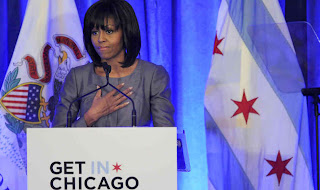 "This is a moral obligation...because ultimately, this city and this community will be judged not just by the beauty of our parks and lakefront or by the vitality of our businesses but by our commitment to our next generation."
-- Michelle Obama, April 10, 2013, at a business leader's lunch in Chicago.

The current gun safety debate was sparked by the murders of 26 adults and children in suburban Connecticut on December, 14,2012. It is now at the top of President Barack Obama's policy agenda, and from the halls of Congress to local school boards, it seems that everyone is talking about whether we've reached a tipping point in our history of gun ownership in the United States.

This is not the first time, of course, that politicians, community activists and educators have chewed this particular bone: My California Senator, Dianne Feinstein,  a San Francisco Democrat, attempted in the 1990s to pass legislation designed to control access to assault weapons; her recent attempt was thwarted by bipartisan resistance, including from her fellow senator, Harry Reid of Nevada. It has become a boring cliche to say that the topic of gun safety is "fraught" here in the U.S.

Yet it is also true that some of us are quite exhausted by the seemingly-endless cycle of boom and bust of this issue,  as in:

So now, the Obama Administration says it wants to break this terrible cycle. And Michelle Obama, the administration's most effective public relations force, is joining the White House's effort. We will see if the First Lady's intellect, compassion and mesmerizing speaking abilities will gin up public will that is strong enough to carry the day.

I have watched this clip of Mrs. Obama's April 10 talk in Chicago a half-dozen times by now. It it remarkable for several reasons, but mostly for this: Michelle Obama, graduate of Princeton, Harvard Law School and a former executive, is telling the over-class in America that it is failing.

With stunning precision she ties the shooting deaths of poor black and Latino kids on the streets of Chicago to the shooting deaths of white kids from affluent families in Colorado and Virginia, then knots those directly to the "obligations" of all American adults -- including and especially the wealthiest -- to quit dithering and start getting serious about ending easy access to guns AND to invest fully in creating better opportunities for kids nationwide. Obviously, she has kinship (as she noted) with many of the poor and working- or middle-class kids who die every day on American streets from gun violence.  Unless you are a willfully blind conservative or a stubborn racist, you can appreciate the authenticity of Mrs. Obama's concern.

It is not politically cynical for her to emphasize her family's similarity to that of the young Chicago woman, Hadiyah Pendleton, who was gunned down for no reason other than foolishness earlier this year.  That Mrs. Obama has come from those same Chicago streets and similar economic circumstances (modest) as Pendleton is (or should be) a cause of awe and optimism to all Americans, if also reason for bittersweet introspection.

In addition,  the relative silence from the "thought leadership" wing of the press, the dearth  of deep analysis of Mrs. Obama's Chicago address is troubling: it signals that the continuing disappearance from our newsrooms of writers, editors and producers who hail from working-class backgrounds is diminishing coverage of topics that deserve urgent attention. The implications of this are huge yet amidst the crazy proliferation of alleged "media critics" and "experts" that now clogs the Internet, there are very few who are qualified to identify this void and propose solutions. (I have plenty of suggestions and here is the most obvious one: The top editors and hiring editors at what is left of the MSM should figure out how to fund pipelines extending directly from J-schools and departments that still focus on teaching the practice, to PAID internship programs. These pipelines must ultimately feed directly into staff positions at what is left of the Legacy news organizations and the handful of web outlets with aspirations of legitimacy. Resources are tight, yes, but I'd say it is a smart investment in their future economic survival.)

Moreover, if future political historians don't identify this Chicago speech as a seminal moment in postmodern American politics (or at least of the Obama Administration's eight year run), I will rise from my resting place and eat my hat.

And a pro tip: If you venture back and read the relatively few press stories or blog posts on this speech, steel yourself for the Comments: I know better than to get upset by the high level of rank racism and misogyny that many Americans apparently hold toward Mrs. O but at a certain point, you have to wonder if we are becoming a barbaric nation. Mrs. Obama's message here is simple yet profound: Those of us who have benefited from the many opportunities that exist in America are morally obliged to create a safe path for the children who live here, and for their children to come.  Full stop.

That some "Americans" aren't capable of appreciating that point and instead choose to hurl in the wake of this speech hateful comments about FLOTUS' skin-color, gender, and "privileged" life makes me frightened indeed.
Posted by Amy Alexander at 11:12 AM No comments: