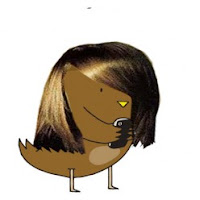 Oh, it was tempting to nest all weekend, snuggled in, enjoying the blessedly cool and tornado free weather. Hasn't this summer been some kinda hot mess? I will tweet you what: BrownTwitterBird and my two BabyBrownTwitterBirds are about through with PEEPCO. I mean seriously. How is a body supposed to keep it together when the lights and A/C are crapping out every five seconds? The Biblical rainstorms and gale force winds we can handle -- BTB has personally clocked mad miles over the years, migrating from the West Coast to the Southeast to the Northeast to the Midwest....Chile, my little wings go all a'trembly at the thought of all that flying....

So we do enjoy a quiet, drama-free weekend now and again. But the sanctity of our humble Silver Spring branch was nearly shattered yesterday morning, after one the BabyBrownTwitters plopped the Sunday New York Times into the nest. Usually I do enjoy the Sunday Times, oh how we greedily pore over the wedding listings and twitter delightedly at all the rich folks from Harvard, and Yale, and Brandeis getting hitched by their Uncle Jasper who went and got ordained by the Universalists through the mail just so he could be the one to sanctify little Madison Brockton's and Kim Yoon's holy matrimony!

Anytweet, after I made the rounds of the A-section, the Style section, and Book Review -- BTB cannot live without a good poring over the Letters section of Book Review, where tout le monde effete NY literary types meet to scratch and claw at each other like peregrine falcolns perched atop the Dakota -- I moved on to the shredding phase of my Sunday Times ritual. (BTB is all about the recycling, and, lucky me, those thoughtful, forward-thinking Timesfolk really do provide the best acid-free, no-ink-on-your-feathers paper evah, most excellent for reinforcing our humble nest.

But as I tore through the Week in Review section, carefully shredding each page into the quarter-inch wide strips that BTB prefers, what do these pinprick black eyes catch sight of?

BTB would like to know when newspaper Columnists got so thin-skinned? Or, for that matter, while we are at it, why Maureen and her ilk in the blogosphere and on the TV machine are so vigorously pooping in the punchbowl of the POTUS over his supposed lack of "progressive" policies?

Around here, we keep a clean nest, Honey.

And let me tweet you what: Unless you are hatching some kind of brilliantly diabolical plan to clip the wings of the POTUS so cleanly and mercilessly that he cannot possibly win another term, so that Sarah Palin can take over 1600 Pennsylvania Avenue....so that you and your ilk can again return to the High Dudgeon of complaining about the bird-brain Republicans who next time around will most assuredly succeed in their evil mission to ruin this country, well, I respectfully suggest you chill out. We know from bird-brains and the POTUS is not among them.

As is? At this point? The finger- and tongue-wagging is most unbecoming, and tiresome. BTB doesn't have fingers to wag and puffed-up feathers don't actually wag with emphasis, so alright you've got me, there was a tiny bit of Green-eyed Monster in that comment, I have to admit.

But I say this with affection, Maureen. Most times, I do enjoy your scratchings. Why, I even agreed with you a few weeks ago, when you said the POTUS might want to dump some of those smug white guy advisers and those La-Di-Dah Brattle Street blacks who fill up his aide ranks, and go hire some salt-of-the-earth Regular Folk (black or white, truth be told), who know their way around a Crow's Nest, and I do mean that gamey dive up in Gloucester, Mass., where all those hearty Lobsta-People used to hang out. Really, it would be so tweet indeed for the POTUS to get some hard-headed advice from a smart, grounded adviser who hasn't yet been puffed up by The Importance of Being a Political Insider. BTB found it amusing, then, that you caught so much hell for writing that, but personally? I think it was gutsy and spot on -- even if you did cadge the idea from the sage of the Lower House, Jimmy "Wise Owl" Clyburn.

That cute little Robert Gibbs called out the "Professional Left" -- to which I tweet, And, what? He was as right as rain, and honestly, Maureen, it might help if you flapped over to the real world once in while, to see how most folks are faring these days. Not just to Northern California, where BTB has noticed you spend a suspiciously large amount of time and seem to take particular glee in flitting around with the likes of Phil Bronstein and Gavin Newsom, aka, the Oily Twins of San Francisco. Really, there are so many more interesting birds to flock with in that corner of our fair land, and in many other cities and towns, too. I mean, your outfit, bless its shrinking heart, does still have a travel budget, right?

And you do know that folks are as varied, mysterious and surprising as a Peacock's jacket under a microscope, yes?

Put on your tough bird panties, and take a spin out of the Beltway perch, why don't you. The "Progressive Left" really needs to get out more, and I mean out where job losses and gun violence and food pantries are not just tweeting-points, they are where folks live....or are trying to, anyway. (Speaking of weddings and gun violence -- BTB pert near dropped her seed when she read about the shoot-out at that wedding in Buffalo, NY, over the weekend. Sure did. And you know -- now THAT is something to fight about, the Gun Lovers who keep insisting it is OK for everyone to be able to go out and buy a gun. Everyone should not be allowed to have a gun, for Tweet's sake, haven't we all seen the former Mrs. Don Draper waving that bb-shotgun around with a cigarette dangling form her lips while she draws down on my cousins? And know what else Maureen and the Progressive Left? If you want to carp at the POTUS over a boutique issue, that is my pick, thank you very much, not your gay marriage or your climate change.)

Off you go now. Time to rustle breakfast for the BBTBs. I'll be looking for an update soon, in my Times, so don't make a BrownTwitterBird have to take off her earrings......
Posted by Amy Alexander at 2:36 AM 1 comment: