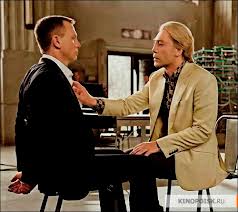 Among many riveting elements to Javier Bardem's performance as "Mister Silva," the newest Bond villain, one stands out:  His resemblance to Republican House Speaker John Boehner.

The actor presents a powerful and coldly seductive figure in his role as 007's enemy. He is tanned, well-coiffed, handsomely turned out in tailored suits. His demeanor is silkily cruel, bemused, proudly debauched -- a decidedly Boehner-esque air.

"Mister Silva" is furious at a woman he refers to as "Mommy,' the head of the British Secret Service portrayed by Dame Judy Dench. There is little exposition in the film as to the exact source of his animosity toward Dench's character. Yet we begin to get the picture during a creepy, remarkable scene with Daniel Craig's Bond in which "Mister Silva" says that "M' has been a 'bad Mommy."  (The subtext during their exchange is chilling and perverse. In that sequence Bond is, in Mister Silva's twisted mind, a surrogate for 'M' aka "Mommy.")

This scene provides a glimpse at the full scope of Mister Silva's emotional turmoil.  As the plot unfolds, it is clear that Mister Silva believes that his future prospects have been crimped and that he blames Mommy.  The high-level cyber skills that he gained over the years in the line of duty are now focused laser-like on making Mommy pay.

I won't spoil it for those who haven't yet seen "Skyfall,' the spectacular fresh installment in the classic action-movie franchise.  But by the time the final credits rolled, the parallel was evident to me:
Mister Silva, a wickedly well-connected 'solopreneur,' is engaged in all-out sabotaging of Mommy,  hellbent on destroying  'M',  and her institutional counterpart, the British government.  We don't learn if Mister Silva's hatred of Mommy is misplaced or if it is a kind of psychological transference but it is clear that it has driven him to acting-out on an epic scale.

As is the case with Mister Silva, I suspect strongly that Boehner and his co-horts in the House have Mommy Issues.  Time and time again they have attempted to take us over the cliff in their overwhelming push to destroy the President, the Mommy figure in their Washington drama.

Early this year, some political reporters finally caught on to the sabotaging behavior of Boehner and his caucus; in August, the floodgates opened after Michael Grunwald's terrific book The New New Deal published.  Grunwald's research revealed the depraved depths of the Republican members' fury toward the president and the lengths at which they were prepared to go to destroy Barack Obama's agenda:

In early January [2009], the House Republican leadership team held a retreat an an Annapolis inn. Pete Sessions, the new campaign chair, opened his presentation with the political equivalent of an existential question: 'If the Purpose of the Majority is to Govern....What is Our Purpose?' Not to govern, that was for sure. His next slide provided the answer:  'The Purpose of the Minority is to Become the Majority.'  ....[snip]

House Republicans were now an insurgency -- an 'entrepreneurial insurgency,' House Leader John Boehner declared -- and Sessions thought they could learn from the disruptive tactics of the Taliban. The key to success in this asymmetrical warfare, he argued, was to 'change the mindset of the [Republican] Conference to one of 'offense,' to take the fight to the enemy.


Well then. The blood-lust to destroy President Obama extended to undertaking 'Taliban tactics.' You have to be emotionally tone deaf not to think that there is much more beneath the surface of such a strategy.

As we also know, Boehner often betrays hints of Mommy Issues in settings not immediately tied to the President. He is famously weepy, choking up at the drop of a gavel. I am not saying that 'real men shouldn't cry.' I am pointing out that Boehner's blubberings during mentions of his youth as a working-class kid always have seemed to me weird and unhealthy -- a sign of unresolved personal issues of a kind that you'd hope a top elected official would have worked through by the time he reaches the apex of government leadership.  It makes it impossible to not conclude that President Obama --  the cool, fair-minded and somewhat effete leading authority figure of our American republic --  was during his first term sabotaged and under-mined by Boehner and a bunch of grown-up babies.

Now the re-election of President Obama has likely cast Boehner and his crew into paroxysms of fear, denial, anger and all the related stages of grief.  We await more messy fallout, even while we understand that the math is no longer in their favor:  Between America's fast-changing ethnic demographics that will likely result in many conservative House members being shown the door in the coming years, to the current party makeup of Congress, all the tears in the world aren't likely to get the GOP members any closer to their destructive end game.

Remember the famous scene from Raiders of the Lost Ark when Indiana Jones faces off against a guy who unsheathes a scimitar and wows the audience with his fancy swordsmanship--only to get shot in the chest by Indy? The swordsman—that’s House Speaker John Boehner right now on the Bush tax cuts. Whether it’s out of deference to the office, eagerness to have an interesting story to write about, or plain gullibility, every congressional reporter in town is now dutifully reporting on his negotiating strategy. But this fight is over. Boehner has brought a knife to a gunfight, only nobody seems to have told anyone in the conservative movement.

I can only imagine how Boehner and his crew reacted to the now-famous video clip of the president's tearful address to his campaign workers in Chicago in the hours after winning re-election:  Despite all the manipulations, tantrums, episodes of holding their breath until they turned beet red or Democrats passed out, Boehner and his crew had not toppled the President. And not only did President Obama prevail on Nov. 6, he had the nerve to turn up in Chicago,  that den of socialist iniquity, to laud the over-entitled Next Gen minions who had, with their digital sleights of hand and shady statistical hoodwink-ery, helped re-elect him. And in a final insult, the President actually shed tears as he addressed his troops. The outrage:  Tears and emotional button-pushing have been the handiest arrows in Boehner's quiver and now here was the President using them!

It is worth pointing out (and not only because I support POTUS and the policies he is attempting to save and/or implement) that the President's emotional moment in front of that campaign staff seemed to me a healthy emotional expression: He was likely exhausted, relieved and genuinely touched by knowing that the young workers who had devoted nearly two years to the effort had succeeded.  It stands in marked contrast to Boehner's weepy outbursts; I am not being cruel to say again that they strongly hint at the presence of something that is unresolved and eating at Boehner's insides.

Before now, the stubborn obstruction from Boehner & Company struck me as purely political and rooted in a craven devotion to the corporations who fund their campaigns.  Racism, too,  is probably baked into their obstruction.  Yet now, thanks to Mister Silver, I see that the Blame Mommy factor appeared to be the strongest impetus in their insane quest.

Now that President Obama is ensconced for another term, it will be fascinating to see if Boehner continues a scorched earth campaign or if he and his caucus at last seek appropriate help for whatever really ails them. We sincerely hope against hope that they don't suffer the same fate as Mister Silva: Ultimately self-destructing but leaving Bond and Mother England ready to fight another day.
Posted by Amy Alexander at 10:50 AM 2 comments: