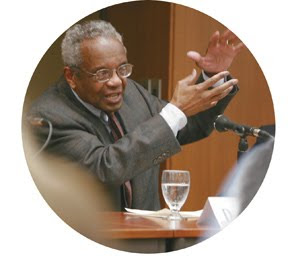 I first learned this during our phone conversations, which began in 1996. That is when I approached him to contribute to a book I was editing.

He lived in New York City, I was in Cambridge, Mass.

In my early 30s at that time, peripatetic and over-confident, I quickly learned to be calm, thoughtful, and focused whenever we spoke by phone. Derrick Bell, an NYU Law School professor, certainly was.

Why did I ask him to contribute to The Farrakhan Factor, a collection of essays by black writers, economists, academics, journalists and activists?

I consulted with more than a dozen people as I sought to build a pool of 15 contributors for the book. It works like this: You contact people who probably won't write for the book but who in all likelihood can A) cogently brainstorm with you, and B) recommend or steer you to others who will write for the book. In that process, which took nearly six months, everyone I tapped mentioned Derrick Bell.

Second, I had read Bell's book, Faces at the Bottom of the Well, and enjoyed it immensely.....even if I didn't get all of the allegories and metaphoric imagery bound up in Bell's brand of high-minded Critical Race Theory. I did get its main message, though: African-Americans face a host of big systemic obstacles that no single silver bullet will instantly vanquish.

More than a decade later of course, I know that I was very fortunate to have made Derrick Bell's acquaintance. I am fortunate, too, that he made the time and found the energy to contribute to The Farrakhan Factor.

His essay in that book, published by Grove Press in 1998, is titled, "Farrakhan Fever: Defining the Line Between Blacks and Jews."

Given the contemporary discussion over the question of whether President Barack Hussein Obama can count on votes from Jewish Americans in the 2012 presidential race, I suggest you take a look at Bell's essay on Farrakhan's outsized place in the imagination of some Jewish Americans.....back in the mid-1990s. Characteristically, Bell's delivery in that essay was gentle, the literary version of his soft voice in real time. But the intellectual rigor, forceful logic, and compassionate values -- from anyone else, it would have been called "radical" -- is unmistakable.

Nowadays, of course, high-pitched rhetoric and slick presentation are what rises to the top of search engines and (apparently) the public's consciousness, coming from our "leading" black public intellectuals (many who now crowd the cable TV airwaves daily), and from just about anyone else who carries the mantle of "expert" on the Big Four topics of our social discourse -- politics, race, education, the economy.

Derrick Bell, of course, made television appearances in his time, too. In contrast to what we see now, however, he may as well have been sleeping upright during his infrequent on-camera turns. Not long ago, this understated demeanor was valued and appreciated for conveying a sensibility that read as Serious. I am not trying to sound like the cranky Old Gal on the front porch, railing about the Krazy Kids and their Hippity Hop Music but the high volume of what passes for "intellectual discourse" these days really does drive Americans farther apart, I believe.

Derrick Bell, like a few other of the "Old School" black intellectuals that I've been lucky to work with, would not be booked on the "leading" national political talk programs of today....unless he agreed to boil his complex, thoughtful theories about intra-ethnic tensions (blacks v Jews), and Critical Race Theory down into incendiary buzz-words.

I worked closely with Derrick Bell to shape his essay in that Farrakhan collection, and, when the book published, we finally met in person.

I traveled from Massachusetts to New York City via Amtrak along with another of the book's contributors, Rev. Irene Monroe of Cambridge. We two met up with Derrick Bell, and sat down at WNYC with Leonard Lopate; we spoke with Lopate and his audience for an hour about Minister Farrakhan, the state of black leadership, and the ways that blacks' history of oppression in America has influenced the definition of "black leadership."

After, we three repaired to a local eatery -- it was a blue-sky, crisp late-winter day in New York, and for a couple of hours, we drank hot tea and traded stories about our respective families.

Derrick Bell had been, by that time, widely described as "controversial, "mostly because he had quit a tenured position at Harvard Law School a few years hence in protest of that institution's inability to hire more diverse faculty. That word -- "controversial" -- popped up again in some of the obituaries that published last week, after Bell died at age 80. The usage of that word is flat and rote....to my ears, it fails to capture the quiet confidence, good humor and inner-calm that I picked up from Derrick Bell in my admittedly limited contact with him.

As I encountered Derrick Bell, he was a gentleman and a scholar, a smart black man from a generation that knew first hand what is required to bring about radical change in the US. Bell succeeded in his brand of quiet radicalism without assistance from non-stop exposure on national cable TV programs, or Tweetable soundbites. I do wonder what he'd make of Herman Cain, and the ceaseless carping from TV noisemakers about President Obama's style and his supposed lack of intestinal fortitude, aka "fight."

I wish I'd checked in with Derrick Bell in recent years. But I am very fortunate to have known him and to have learned from him the power of steady, low-pitched strength.
Posted by Amy Alexander at 1:42 PM