The Only Presidential Debate Schott I Want to Hear 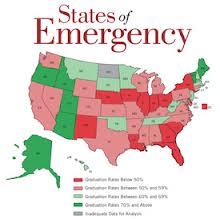 That Frank Bruni got the drop on me with a New York Times Sunday column outlining his Wish List for the presidential debate: President Barack Obama and former Governor Mitt Romney, the GOP nominee for the presidency, should emphasize during tonight's televised debate the idea that more Americans must be willing to sacrifice.

At The Nation and other partisan news outlets, similar requests/demands have since been posted, too.

Here is my fervent wish for what the incumbent Democratic candidate and Governor Mitt Romney spend time on in tonight's debate:

How about a robust back and forth over the achievement and graduation rate gap that exists between black and Latino boys in public schools and their white counterparts?

The Schott Foundation recently released a big report on black and Latino boys and graduation rates at public secondary schools in the United States.  Quite dramatically it is titled "The Urgency of Now," and it looks at graduation rates for these populations in all fifty states.  Its findings were reported by NPR and other major news outlets, which means that it should not have escaped the education policy folks in the Obama and Romney camps.

So will this topic emerge in tonight's debate?  Or will both candidates stick to spewing boilerplate language about student loan debts in higher education? About the need for our education systems to remain 'competitive' in the global landscape?

If the conversation excludes early child development, primary and secondary schools in America, it will be next to worthless.  On this I am nonpartisan.

Last week the American Federation of Children - a Michelle Rhee-friendly, charter school oriented advocacy group --  sent a note to debate organizers and to Jim Lehrer of PBS, who is scheduled to moderate.  It reads in part:

After the economy, education ranks as a top priority for voters, and in particular, Latino voters. As president, how would you ensure that all children – regardless of their parent’s income or ZIP code – are afforded the opportunity to attend a quality school?


The jacked up status of America's public primary and secondary educational system is the one area where I can usually find common ground with conservatives. More honesty?  I am exhausted on too many levels by the Administration's stasis on this topic.  I was touched when President Obama said he felt as if Trayvon Martin could have been his own son.  But what if anything does he feel about the millions of young black men -- POTUS lookalikes or no -- who are being consigned to the prison-pipeline thanks to failing public schools in America?

I live in the real world. It is a place where my son (born of college-educated, middle-class African-American parents) struggles daily, even within a public school system that is one of the best in the nation.  For a few reasons, I can't at this time outline the many contradictions, nuances, benefits and drawbacks of this. But even with my resources and know-how, the challenges are many; these challenges also are rooted in systems, values and economic realities that often prove to be beyond my capacity to ameliorate.

Until our political 'leaders' make a sincere effort to find solutions to long-standing economic, cultural and political factors that enable this growing graduation rate disparity, it won't change.  A good way to start, at least, would be to acknowledge during these debates that we have a problem, and that the future of our republic is tied inextricably to resolving them -- or not.

Posted by Amy Alexander at 8:49 PM