Want a Real Washington Scandal? The Establishment Is the Cuckoo's Nest 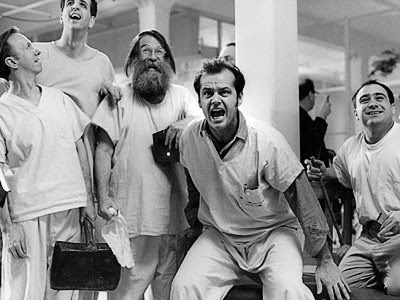 Much of what doesn't work in America can be traced to our antiquated views on mental illness.

I know a bit about the wide, destructive ripple effect of mental illness across our nation. That's why I am intrigued by the new White House initiative to raise awareness about mental illness, and to improve services and treatment.

I observed the Conference that was held at the White House today, and didn't even mind that it was somewhat predictable and staid. By my estimation, the Scale of Urgency on this topic calls for fire and brimstone but then again, I am not a government functionary or a member of the Establishment.  Still, I agreed with the general thrust of the pitch: America requires strong Executive Leadership on Mental Health. And so I was moved by President Obama's address that led off the Conference this
morning:  At the same time, having spent far too long in D.C.'s media fishbowl by now -- eight years this month, aka, FAR TOO LONG -- it is not surprising that the news-cycle today barely marked this launch. Mental health is not "sexy," not even when a spate of high-profile gun-related deaths caused by individuals with untreated mental illnesses, or umpteen studies and lawsuits prove that our prison systems are filled with inmates who suffer from mental illness; not even when a growing body of economic research piles up showing that our ability to compete on the global stage, too, is being negatively affected by our piss poor healthcare and mental healthcare systems;  not even a surfeit of such data convinces those with true power to drive genuine change to take action by funding bills to increase access, raise awareness and generally open the gateway to mental health parity. And I mean hedge fund CEOs, who are now the publishers of our news outlets, and leaders of tech companies, who increasingly are operators of our news outlets.

No, having spent many years researching, writing about, and promoting this topic -- specifically the deplorable absence of culturally competent mental health services -- I'm not surprised that today's White House press event failed to penetrate the news cycle. There was no Showbiz treatment from my colleagues in the press...and I mean primarily the TV wing. The Washington Post, and a few other legacy outlets dutifully covered it today but there was no fire and brimstone flaming from the Internet or the TV, the two platforms most likely to catch the attention of the largest audiences.  Most of the Beltway gang jumped right on the death of Senator Frank Lautenberg.

The death of Senator Lautenberg was important -- but more important than the long-tail problem of underfunded mental health programs in the U.S.?

The answer is "Yes," if you are inclined to play the horse race, Inside-the-Beltway BS game of "Who Will Replace the Venerable Old Senator?" sweepstakes game. For anyone outside of Sen. Lautenberg's district, though, I am pretty sure that such inside baseball prognosticating doesn't matter. Given the events of the past few years (Columbine, Virginia Tech, Aurora, Newtown, to name but a few), I honestly don't know how much more evidence people need to understand the connection between untreated mental illness and tragedies on mass scale.

That millions of Americans are experiencing tiny tragedies, too, in private that result directly from untreated or poorly treated mental illness of family members doesn't seem to move the political needle very strongly in a positive direction. Nor has it convinced whoever holds the purse strings at news organizations to make coverage of mental health enough of a priority to fund a full-time beat. (The last of the reputable print and broadcast news organizations, including The New York Times and NPR, do have full-time healthcare beat reporters, and science too. Yet somehow, mental health is not to my knowledge broken out into its own category worthy of a separate full-time staff allocation.)

I am reminded of the classic definition of mental illness: "Doing the same action repeatedly and expecting a different outcome."

Thirteen years ago I wrote a book describing why America needs to view mental health as a serious issue. I remain invested in the effort to find solutions. But I'm wary of "doing the same action repeatedly," hoping somehow that the press or the Establishment will react differently. I can't afford to court that kind of insanity.
Posted by Amy Alexander at 7:41 PM